Twenty-one awards have been conferred in the latest assessment round for Athena SWAN Ireland with one institutional Bronze renewal and the first ever Silver awarded to a department.

Twenty-one awards have been conferred in the latest assessment round for Athena SWAN Ireland with one institutional Bronze renewal and the first ever Silver awarded to a department. This takes the total number of Athena SWAN awards in Ireland to 87 (19 institutions, 68 departments).

Ireland’s first Silver award goes to the Department of Physics at the University of Limerick. The department highlighted a range of impactful activities, including extensive outreach activity to encourage female students to take physics as a Leaving Cert. subject and to consider studying physics at undergraduate level. The department has seen an associated increase in female undergraduates from 37% to 54%, due to higher numbers of women taking up education courses, supporting their aim to increase the number of female physics teachers in Ireland.

New discipline areas are recognised in departmental awards achieved in this round, including Linguistic, Speech and Communication Sciences (TCD) and Politics and International Relations (UCD), with a continued strong performance in STEMM subjects including health sciences, with awards for Nursing and Midwifery, Medicine, Public Health, Physiotherapy and Sports Science.

Simon Harris TD, Minister for Further and Higher Education, Research, Innovation and Science, said, “Advancing gender equality across Higher and Further Education is a priority for my department. Today’s announcement of 21 new Athena SWAN awards demonstrates the ongoing commitment of our higher education institutions to improving gender equality. I’d like to particularly commend the Department of Physics in the University of Limerick for achieving the first Silver awarded to a department in Ireland and hope to see more departments reaching this milestone in the coming years”.

Dr Victoria Brownlee, Head of Athena SWAN Ireland, said, “This is an important moment for Athena SWAN Ireland with the attainment of the first Silver award. It is very encouraging to see tangible improvements in institutions and departments as a result of the implementation of Athena SWAN action plans. Each of these awards represents a commitment to action to improve gender equality for those working in higher education, and we look forward to seeing further evidence of the impact of these activities in the future.”

Dr Ross Woods, Senior Manager at the Higher Education Authority’s Centre of Excellence for EDI, said, “These awards are testament to higher education institutions’ commitment to gender equality, particularly in the context of the impact of Covid-19 restrictions during the past 18 months. We know that the pandemic has had serious gendered impacts and the HEA encourages our institutions to continue their efforts to advance gender equality in higher education in these extraordinary times.” 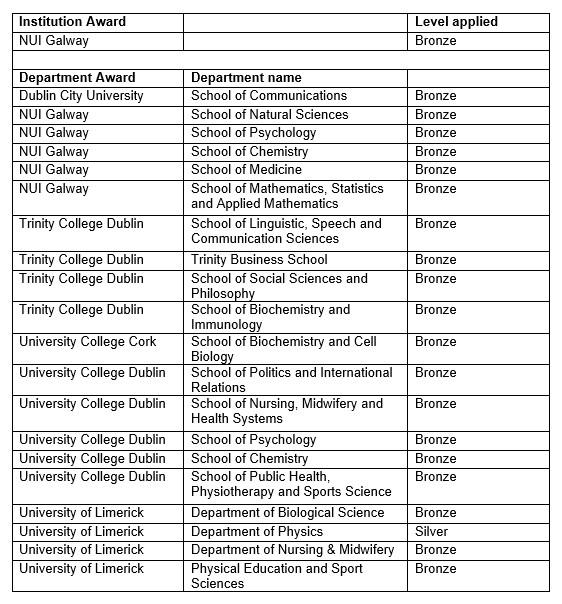 The Athena SWAN Charter is an accreditation framework that is used across the globe to support and transform gender equality in higher education (HE) and research. Athena SWAN launched in Ireland in 2015 and versions of the charter are in place in the UK, Australia, the USA, India and Canada.

The charter was established in 2005 to encourage and recognise commitment to advancing the careers of women in science, technology, engineering, maths and medicine (STEMM) employment. It has since been expanded to address gender equality more broadly, not just barriers to progression that affect women. The charter also now includes Arts, Humanities, Social Science, Business and Law (AHSSBL) departments as well as professional, managerial and support staff working in HE.

Athena SWAN awards are conferred at Bronze, Silver, and Gold to institutions and departments. Bronze award holders are recognised for their detailed self-assessments of gender equality, their commitment to targeted action plans, and their capacity to deliver these plans and bring about change. Silver and Gold awards recognise institutions and departments that have a record of activity and achievement in relation to gender equality and are leaders of good practice in the sector and wider community.

Engagement with the Athena SWAN charter is a key pillar of Ireland’s national strategy for gender equality in higher education. The Department’s Gender Action Plan 2018-2020  has explicit recommendations and actions for HEIs in relation to the attainment of Athena SWAN certification and eligibility for research funding. Institutional access to Athena SWAN Ireland is provided by the Higher Education Authority.

Athena SWAN Ireland is managed by Advance HE, a registered charity that works with governments, sector agencies, institutions and individuals to support higher education. Advance HE provides resources, training and recognition schemes—one of which is the Athena SWAN Charter.